Green Screens, Hillforts and Drawing with a Pencil

Since I finished my PhD and started to work freelance full-time back in the summer I’ve worked on quite a mix of jobs though for obvious reasons I’m not always able to share the production process or final outputs online right away, if at all. However, I’m still a keen blogger and this month as it happens there are a few projects on my books that I can offer a sneak peak into.

First off there’s the Links of Noltland research project which continues to progress following our August fieldwork. The team have been working away to edit together sequences of time-lapse, transcapes and animated photogrammtised terrain. I’ve been developing the reconstruction and matte painted environment to feed into our narrative introduction to the site. Populating animated reconstructions with people is something of a challenge and has preoccupied our project meetings over the past few months. Representing people within reconstructions is hugely important but can be enormously problematic, particularly when dealing with prehistory where the representation of a human figure can immediately have massive implications for the interpretive direction of the work and the way it is perceived by an audience. Additionally, the technical side of representing people within a virtual environment can be tricky and easily take a trip into the darkest depths of the “uncanny valley”. And trust me guys, nobody wants that. Nobody.

The above video is an excellent (and pretty funny!) introduction to the concept so I wont faff on explaining it in detail here – point being that the team and I have begun to explore the possibilities for representing human characters within the reconstructions by other means. This develops on from the work we did at Skara Brae where we explored the merits of mixed media and used a combination of live action filming and a digital character modeled by yours truly. The main issue with the digital character was that we didn’t have the time to animate her (or the advanced technical skill to do it properly) so she remains static throughout the scene. This is fine for stills but as part of a moving image it’s decidedly distracting.

So, with this in mind we set about addressing the issue head-on and started to experiment with a few different options, one of them being stylisation. Enter the DJCAD green screen. 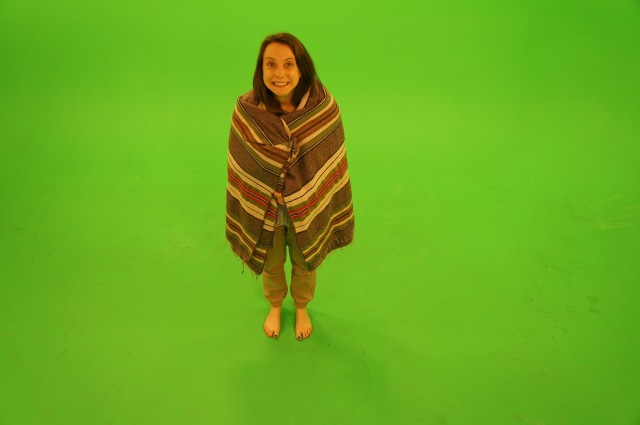 Me showing some serious enthusiasm for the green screen. 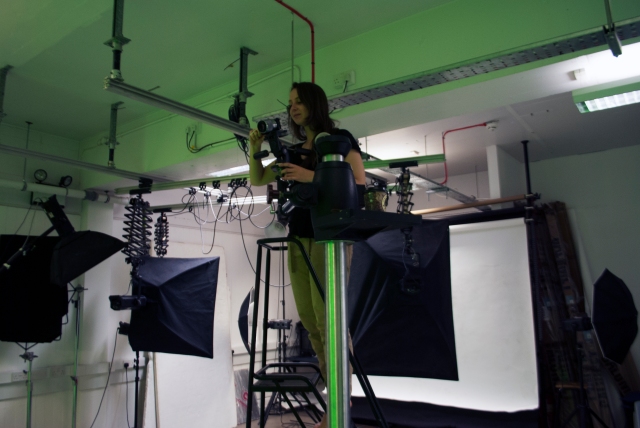 Setting up the camera in the green screen room with Kieran at DJCAD.

Kieran and I wanted to have a play around with filming live action movement to be dropped into the virtual scene surrounding the reconstruction. We planned to bring the “characters” in as dark silhouettes so luckily working out costumes wasn’t necessary in this instance as long as the overall shape and movement were believable. We spent an hour or so taking turns to scuffle about on the floor, trying some actions like mimed flint knapping to capture a sense of activity and human occupation of the site without assuming too much.

Kieran dropping the green screen material over the rendered scene.

It was just an initial test day and there’s no guarantee the material will make it into the final edits, but it was certainly worth a morning of experimentation!

In-progress render of the Structure 7 reconstruction at the Links of Noltland – still some quirks but I think it’s getting there, comments/criticisms/tearing apart as always welcome, have at it guys!

In other news I’ve also begun a bit of work for Kieran on his Caterthuns PhD project.

Cup and ring marked stone at White Caterthun, taken during our field visit back at the end of October.

I’m using Kieran’s White Caterthun sketch below (which quite frankly looks awesome to begin with!) to start modelling the fort in 3D. This model will be incorporated into his existing camera move sequences from the above video. Any thoughts on the sketches let us know – there’s still time for a few edits before the modeling begins!

The other major development in the past few weeks is that I’ve more solidly set up my freelancing office at home – as you can probably tell I’m quite proud of the wee set up I put together using only a Sweedish allen key (and to be fair my friend Amanda, who knuckled down and pretty much built everything while I sat in a pile of screws and plyboard looking bewildered and drinking wine).

My snazzy new office in my same old living room!

In between green screening, hillforting and building all the shelves IKEA had to offer I’ve been doing a fair bit of artifact illustration and photography which has been nice as I do really love drawing with an actual pencil now and again. 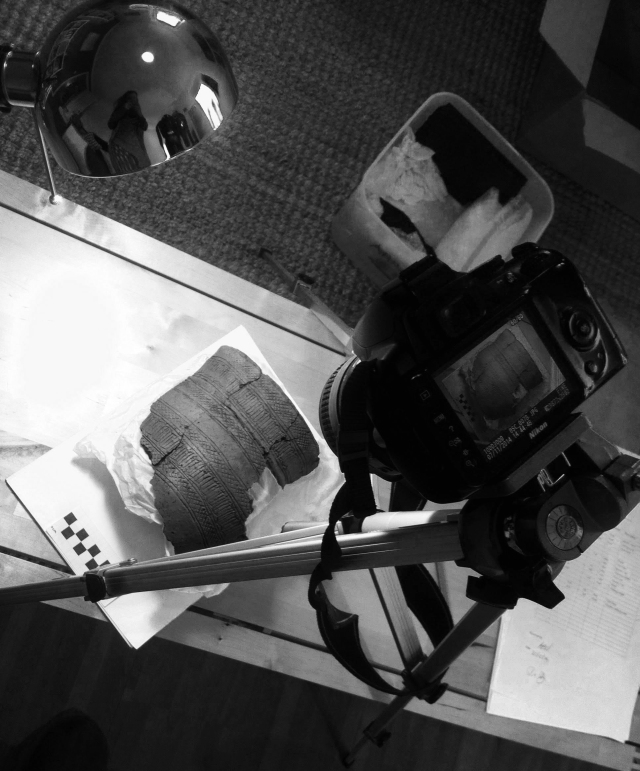 Anyway, that’s all for now folks – I’ve got work to do! 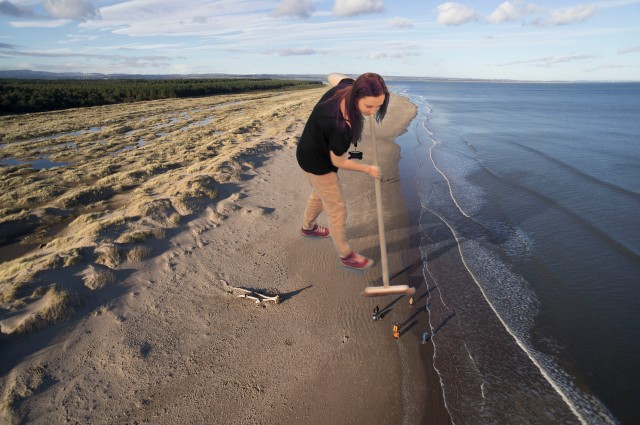 ← Would You Like to Read My PhD Thesis?
The Monumental Collective →