Last year Kieran and I were approached by the Dundee City Council and MTC Media to produce a series of short films and animations depicting key periods in the history of Dundee Law (the iconic hill in the centre of Dundee). Amongst the material the Council had sourced for the project were a series of black & white and sepia images depicting various locations and lost architecture along the Dundee to Newtyle line. We were really taken with the photographs as they captured a fantastic sense of place so after a few discussions an idea to pop them out in 3D started to develop.

Kieran took charge of the visual effects side of layering the architecture to pop out the photographs, Tom Paxton was tasked with designing and animating some characters to populate the scenes and I had the job of reconstructing and animating a couple of the steam engines which used to operate along the route…and some horses, but we’ll get to that later!

There were two engines in particular, a passenger engine from a photograph taken at Lochee Station in the 1890s, and the 1833 Earl of Airlie which did a great deal of grunt work hauling coal and the like up and down the line.

A newspaper photograph of Lochee Station taken during the 1890s, credit.

We had identified an ’empty’ photograph of Lochee Station without people or trains on the line which Kieran would later build into the backdrop, but I used this newspaper image to help identify some of the engines which historically frequented the station. Lucky for me my Dad, Eric Watterson grew up close to a train yard in Darlington which founded an early love of historic locomotives (in my childhood home the ladder to my bunk bed is actually scrapped from an old train, fun anecdote in this context but agony to climb up each night in bare feet!). He was able to help me identify the engine from this photograph as the wonderfully named “Oban Bogie” which was a Caledonian Railway 179 Class locomotive.

Once we’d identified the engine from the image I set to work researching the specification to see what additional reference I could find. I located a few additional images and was also guided by the hive mind of train buffs John Whyman kindly put me in touch with to ensure our representations were on the mark. The collective knowledge from Martin Allan, Niall Ferguson, David Martin and Elliott Simpson was a huge help particularly when it came to checking the proportions and details of the Oban Bogie. Working from grainy photographs meant that it was tricky to identify features and cropped perspective images proved to be impossible for correctly gauging proportions.

Modelling the Earl of Airlie in comparison was a dream! Not only was I able to find engineer’s drawings, etchings and photographs, but the McManus Galleries here in Dundee even had a scale miniature of the engine on display.

The Earl of Airlie, illustration from J. and C. Carmichael.

The Earl of Airlie reconstructed in 3D.

However…animating it correctly was one of the most complicated tasks I’ve ever taken on! In order to get all of the pistons and arms of the Earl moving correctly I needed to rig a series of IK chains in Maya so when the large front wheel turned the pistons moved accordingly (opposite to how a real world engine works obviously, but hey that’s animation logic for you!). There were so many test versions where joints which should be fixed wouldn’t stay put and at one point I had the main driving rod flying around in a manic unhinged loop. After many late nights and early mornings trying to solve the issue the answer of constraining one section and keying another came to me in a dream. I’m not joking! I woke up about 4am with the solution and just went right to work and tried it – it worked and the Earl was finally moving as it should…I’m not ashamed to say I sat dumbfounded for a few moments and shed more than a few happy tears!

Usually the reconstruction work I do is very structural (think lumpy stone walls, hillforts and so on) so this is really the first project I’ve worked on where engineering and locomotion (pun intended!) were so fundamental to the success of the final animation and the story we wanted to tell. There was something so satisfying about ensuring all the minute details of these engines were as accurate as possible and that their movement was authentic.

Meanwhile, Kieran was busy bringing the photographs into three dimensions. As you can see from the image below this was achieved by modelling sections of the architecture in the foreground and projecting the image across the different planes to achieve a bit of parallax when the camera moves as well as giving depth to the scene for the train to move through. Pure visual trickery, I love it!

The project was absolutely brilliant to be a part of and as always the research process uncovered some real revelations along the way. One of the most interesting was the realisation (again, thanks to our hive mind of train buffs!) that at Ward Road and through the Law Tunnel the carriages would have actually been pulled by horses not trains for these sections of the line.

Additionally, for the shot above at Lochee Station the trains would have run on the opposite side of the line though we made the compositional decision for the Oban Bogie to arrive on the right hand tracks so as to give the best and clearest view of the train and its moving parts. The only other historical inaccuracy (at least that we’re aware of) are the sleepers for the Earl of Airlie, which should really be concrete and spaced slightly further apart though unfortunately this was picked up too late in the production process for me to fix…but hey, not bad for a couple of train newbies eh?

Sound effects were added by MTC after we completed the animation and I’m told the bell and hooter for Lochee Station should be a whistle.

One of the things I really love about being a reconstruction artist is that each project is so different and by the end of the process I’ve learned so much through my own research and talking to so many enthusiastic folks who really know their stuff. I’m really proud of what everyone was able to achieve working together on this project.

Never a dull moment as they say – we even made it on the local STV News at Six and into the Evening Telegraph! 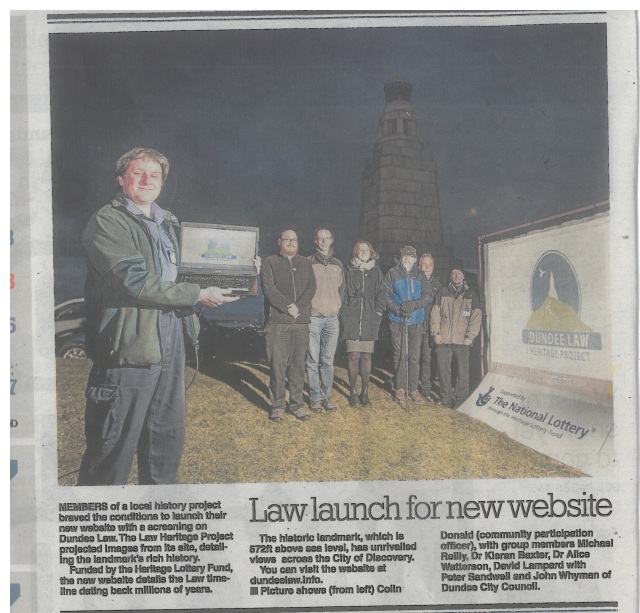 Do go and have an explore of the new Dundee Law Website too!

← Reconstructing Kildalton Chapel: a project with Archaeovision and Islay Heritage
The Shieling Project →
Join 214 other followers